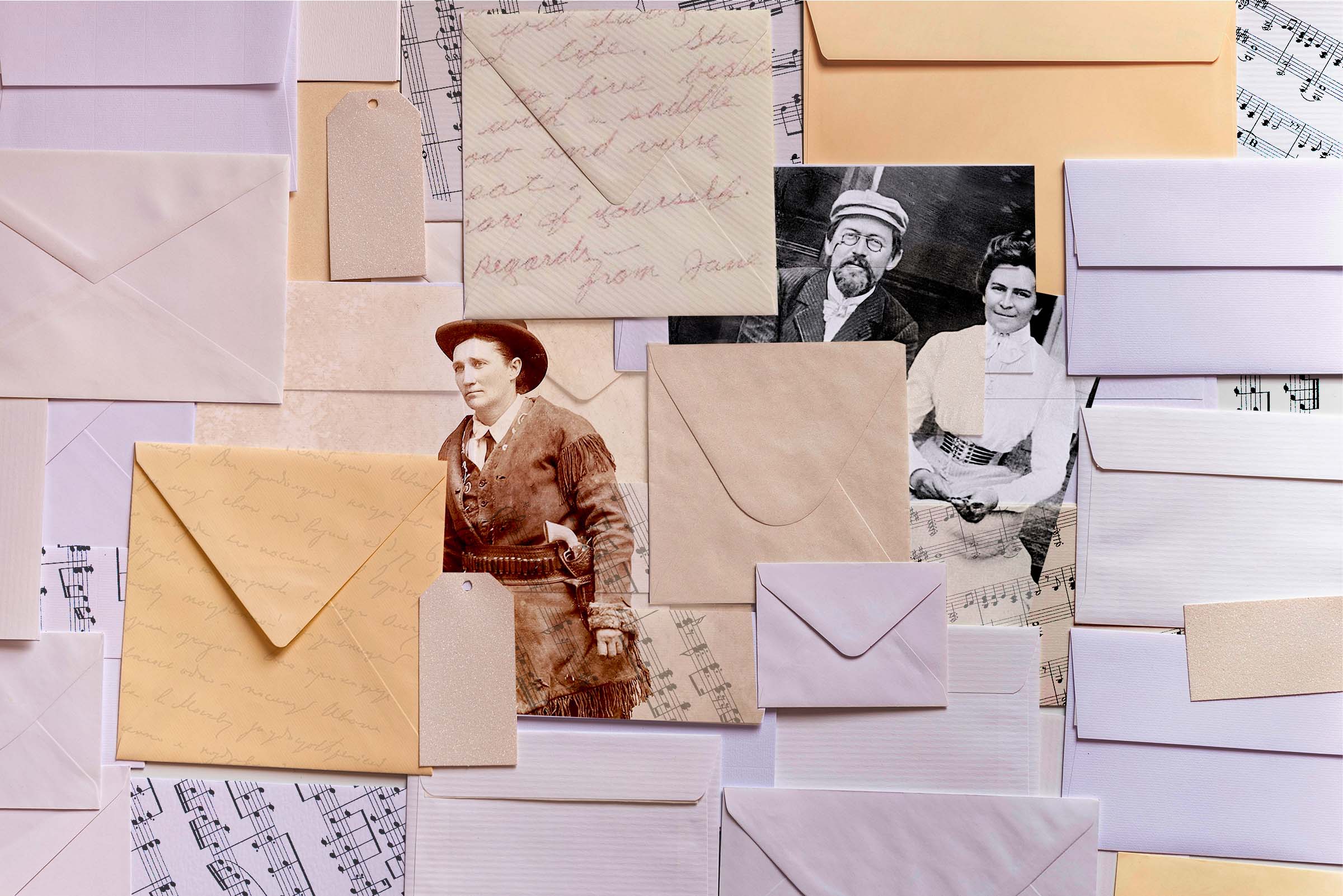 The program is inspired by the letter scene in opera, a dramatic device typically employed to express heightened inner emotion or key plot twists.  In art song, this device is transformed through settings of historical letters that convey the beauty of real-life language and drama.

Repertoire includes works based on a variety of literary sources.  Calamity Jane’s letters to her daughter, Janey, reveal the rough and tumble life of an American frontierswoman in the 19th century (“Songs from Letters”, Libby Larsen).  Mistress Ford and Mistress Page confide in one another the love letters they’ve each received, only to discover they were issued from the same pen, that of John Falstaff (Act II trio from “Sir John in Love”, Ralph Vaughan Williams, after Shakespeare).  The program concludes with the correspondence between actress Olga Knipper and playwright Anton Chekhov during their four-year marriage until his death in 1904 (“A Few Words about Chekhov”, Dominick Argento).
Pairing literary works with site, the event is hosted by after-words, an independent Chicago bookstore.
While singers will be unmasked during the performance, all audience members are required to be masked before entering the bookstore, and to remain masked at all times.

He was the only American finalist in the 2015 Das Lied Song Competition, and maintains an active performing schedule. He has served as faculty at Viterbo University and was the Visiting Artist in Vocal Coaching and Collaborative Piano at the University of Northern Iowa. He is also the Co-Founding Artistic Director of the Source Song Festival. Held in Minneapolis, Minnesota, Source is a week-long celebration of words and music which includes public concerts and masterclasses by international artists for pianists and singers, as well as a composer institute led by Libby Larsen.

Bilyeu has performed at such venues as the Grand Théâtre de Tours (France), the Schubert Club of St. Paul, the Everson Museum (New York), PianoForte Foundation, and the Belle Sylvester Recital Series of New York. He has been heard via live radio broadcast on Minnesota Public Radio with soprano Lori Phillips, and on WFMT via the Dame Myra Hess Memorial Concert Series.

He holds degrees from the Chicago College of Performing Arts and the University of Minnesota, studying with Timothy Lovelace and Chicago Symphony Orchestra pianist Mary Sauer. He has studied at the Aspen Summer Music Festival, Britten-Pears Institute, Vancouver International Song Institute, l’Academie Françis Poulenc and was named a 2018 Crear Scholar, which took him to Scotland to study with Malcolm Martineau,. Additional studies with Roger Vignoles and Susan Manoff.  Please see www.markbilyeu.com & www.sourcesongfestival.org for more.

Megan Fletcher is a soprano and voice teacher based in Chicago. As an avid choral singer, she can be seen performing with the Grant Park Chorus, Chicago Symphony Chorus, and William Ferris Chorale. She debuted with Chicago Fringe Opera in 2018 as Leonora in Paul Hindemith’s The Long Christmas Dinner. As an advocate for social justice in the arts, Megan has appeared performing as a soloist and chorister with Hearing In Color, a Chicago arts organization seeking to highlight underrepresented music written and performed by people of color and other minorities.

Soprano Jenny Schuler has earned praise in recent seasons for her powerful vocalism and compelling stage artistry. She has been hailed as a “sumptuous soprano,” with a voice “rich in nuance” and “a vivid presence on the stage.” Her 2020/2021 season highlights include a debut with Chicago Opera Theater as Isabela in La Hija de Rappaccini (originally Matilde in Catan’s Il Postino), a debut with Opera Festival of Chicago in the role of Giorgetta in Il Tabarro, in addition to her role as a featured artist in the Dante 700 recital series also with Opera Festival of Chicago..

In the 2019/2020 season Ms Schuler made her Oregon Symphony debut as the soprano soloist in Beethoven’s 9th Symphony and returned as Mother in their production of Hänsel und Gretel, in addition to debuting the title role of Tosca with New Jersey Festival Orchestra. Productions canceled due to Covid-19 include Louder, Longer, Wagner! (Valerie/Brünhilde) with Lyric Unlimited, Lyric Opera of Chicago & Second City, and Songs from Letters recital with Chicago Fringe Opera.

Recent season highlights include the title role of Ariadne auf Naxos as a guest artist with Indiana University, Berta in Il barbiere di Siviglia with Sugar Creek Opera, Ariadne auf Naxos and Catán’s Florencia en el Amazonas, both with the A.J. Fletcher Opera Institute, and Leonore* in the Princeton Festival’s production of Fidelio.

Mezzo-soprano Bridget Skaggs has swiftly gained the attention of Chicago audiences as “a compelling force” with an “agile, expressive voice” (Chicago Classical Review) equally at home in opera, art song, and oratorio.  Critics have noted the way she “lights up the scene” (Chicago Reader) in performances with Chicago Fringe Opera, where she debuted the role of Austin in the world-premiere production of Rossa Crean’s The Great God Pan in 2018, and sang Christopher Cerrone’s Naomi Songs with “warm and plaintive mezzo” (Chicago Classical Review) as part of Love Wounds, a multi-disciplinary exploration of the composer’s works, in 2019.

Bridget is increasingly recognized for her excellence in the musical and movement styles of Baroque repertoire, having performed Giunone in Cavalli’s La Didone with Haymarket Summer Opera Program in 2018, Bradamante in Handel’s Alcina with Chicago Vocal Arts Consortium in 2019, and performed numerous Bach cantatas as a Festival Artist at the Baroque on Beaver Island Festival (MI) in summers 2014 and 2015.

Nationally, Bridget has appeared as the Fox in Janacek’s The Cunning Little Vixen with Opera Steamboat, and Charlotte in Sondheim’s A Little Night Music with Pittsburgh Festival Opera, where she served as Young Artist.  Internationally, she has toured Bruckner’s Te Deum as alto soloist with Blue Lake International Symphony.  Her vast concert and oratorio repertoire includes the Ravel Shéhérezade, Duruflé Requiem, Vivaldi Gloria, Handel Messiah, and Bach Magnificat.

A passionate advocate for art song, Skaggs is a founding member of vocal chamber quartet Fourth Coast Ensemble, and was recently named Vocal Arts Associate for Chicago Fringe Opera. She has twice been awarded the Collaborative Arts Institute of Chicago’s vocal chamber fellowship.  This season she records music by composer Lori Laitman, and has recorded the American premiere of Paul Abraham’s 1932 jazz operetta Ball at the Savoy for future release.  A native of Southlake, Texas, Bridget received her education at Oklahoma City University’s Wanda L. Bass School of Music, and resides in Chicago.

Chicago native David Govertsen has been active as a professional singer for nearly twenty years, portraying a wide variety of opera’s low-voiced heroes, villains, and buffoons.  Mr. Govertsen has appeared as a soloist with numerous local and regional opera companies, including Lyric Opera of Chicago, Santa Fe Opera, Tulsa Opera, Chicago Opera Theater, and the Haymarket Opera Company.  He is a member of the vocal chamber quartet Fourth Coast Ensemble, performing art song in Chicago and throughout the Midwest.

Supported by The MacArthur Funds for Arts and Culture at The Richard H. Driehaus Foundation, The CityArts Grant from the City of Chicago Department of Cultural Affairs & Special Events, & National Endowment for the Arts.